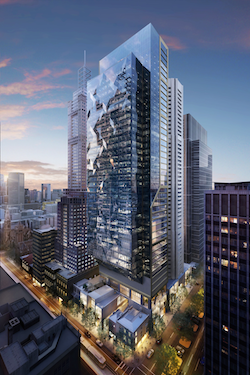 Yuanda’s internationally renowned capacity and capability will be on display at Melbourne’s 80 Collins project with a façade appearing to cling to the rear structure and clad with glass panels that give the frontage a rippled, shard-like effect, Managing Director ZhiJun Liu said.

This was alongside a “boutique” hotel and a range of retail space dedicated to international luxury brands in an unrivalled location and will be accompanied by a major refurbishment of an adjacent office and commercial tower.

“Yuanda was contracted to design and construct the tower curtain wall façade included the chamfer portion, with the total quantities for the façade of approximately 27,000sqm,” Mr Liu said.

“The chamfer façade is supported by steelworks and help create the diagonal features of the curtain wall.”

80 Collins is situated at the centre of a globally recognised precinct with a distinct local identity.

QIC brought together architects from around the world to work up the project including Woods Bagot, and Seventh Wave, along with Amsterdam-based UN Studio and French outfit Jouin Manku with Multiplex the contracted builder.

The project is aiming for a 5-star NABERS energy and a 6-star Green Star office design ratings.

Construction started in 2017 and 80 Collins is expected to be completed in 2020.