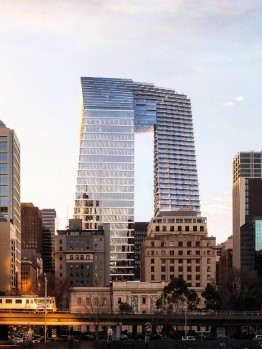 Manufacturing is about to begin on the façade for the mixed-use development at 447 Collins Street, in Melbourne.

Performance testing of the façade design was completed by CSIRO today and, as expected, the Yuanda products passed with flying colours.  The project will now move into the manufacturing phase, with panels to begin arriving on site in early 2018.

Yuanda Australia delivered a nimble and timely response to late changes in the design of the façade, incorporated as an additional layer of safety and certainty following the Grenfell Tower fire in London.

Yuanda Australia’s Technical Manager Gareth Winstanley said the company only used fire-resistant panels in its façades to avoid any local repeat of the London incident.

However, he said the company had worked with the building owner, CBUS, to introduce stainless steel panels on the exterior of the building, instead of standard composite fibre.

“The building will now have solid stainless-steel nosing, which boosts fire safety for the owners and tenants for the life of the building,” Mr Winstanley said.

“While the previous design had already been approved by fire engineers, the client decided to request the last-minute change through a preponderance of caution.

“Yuanda Australia’s market strength and technical expertise meant we were able to incorporate the change in material at a very late stage in the planning process, and make it function as it should.

“And today’s performance testing results prove that the changes have been successful.”

“It’s been a learning curve for all of us to see how people work in different cultures.  I think we’ve been able to bring the best of both worlds to the project at 447 Collins Street.”