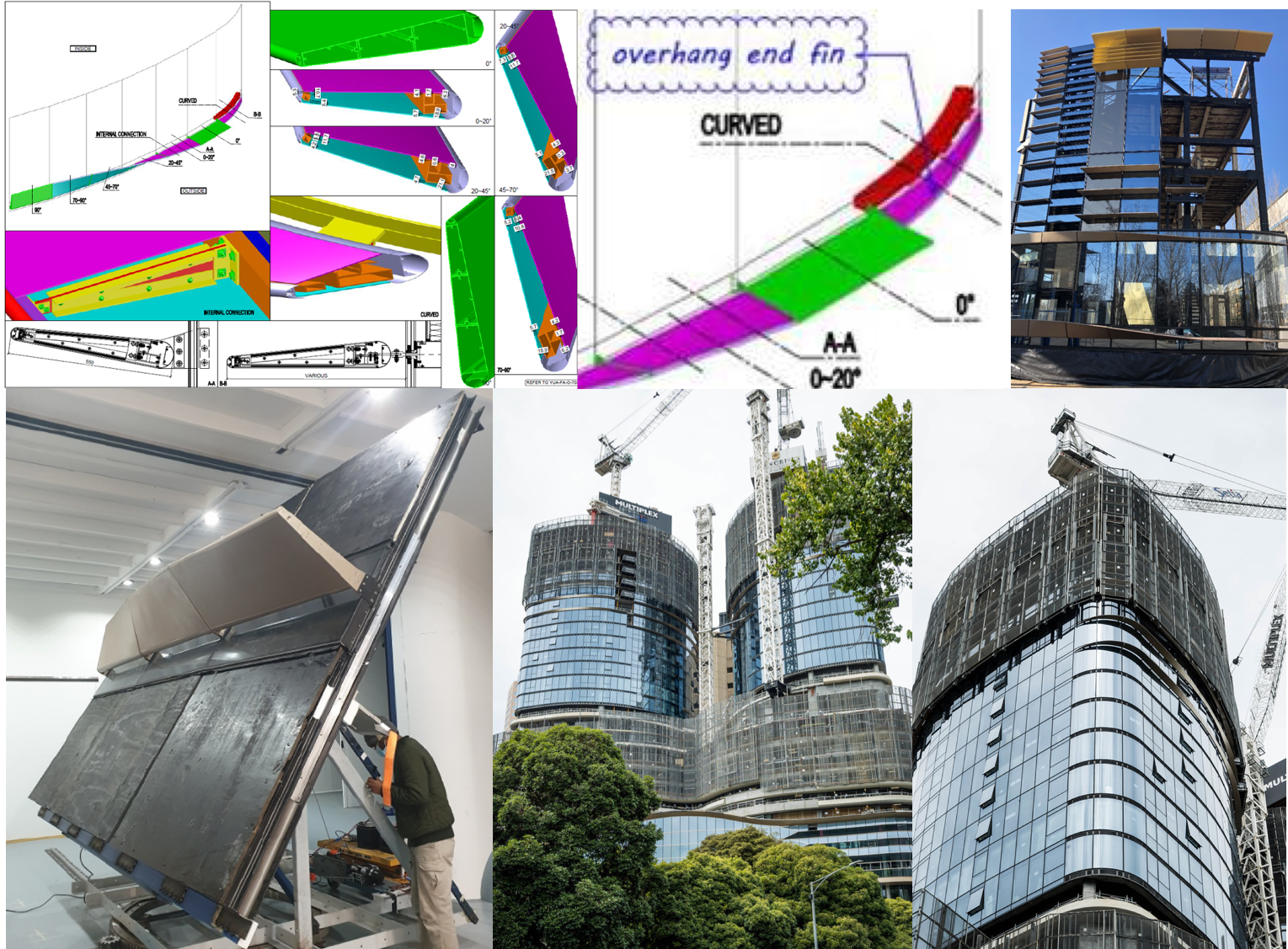 Rising out of the ground on the corner of Exhibition and La Trove Street in Melbourne, is the twin tower development of Malaysian Property Developer, Setia. Designed by Cox Architects and Fender Katsalidis, the Residential tower - Tower 1 and the 5-star Shangri-La Hotel – Tower 2 will rise 232 metres above ground level. Both towers will incorporate some of Yuanda’s most innovative and technically demanding twisted double curved horizontal sun shading fins that are gold in colour.

From Design, the horizontal fin sunshades were modelled in 3D as shown in the image below.

A full-size Visual Mock Up (VMU) was fabricated and erected at the Yuanda Shenyang factory in China. Members of the COX team and MPX were invited to view the specimen. Emphasis on the horizontal alignment of each sunshade was an architectural requirement ensuring that each fin to fin joint flowed seamlessly without having steps or any joint irregularities. The building envelope shown below requires many design decisions to be made. The decisions require effective conversion of the design to the fabrication stage and then ultimately to the site installation. Yuanda utilised powerful digital design tools that represents the physical product in the digital world, allowing this complex process of simulation to reduce time and cost.

The Wind Tunnel Test had various options that were discussed with MEL (Wind Consultant) in Melbourne with the objective of testing the prototype to cover the variety of fin orientations on the project. The objective of the test was to determine if a) vibration would cause any fatigue in the sunshade primary fin plates and b) if varying the wind speeds and wind angles would result in any aerodynamic noise being produced.

The journey from the 3D model, the VMU, the wind tunnel test and as seen in these recent photos, to site, has been a long one. From digital to reality, Yuanda has achieved the architect’s vision and client’s quality standard. The 308 Exhibition Street Project in Melbourne is testament to the collaborative approach of design and engineering between the Yuanda Australia and Yuanda China team and the company’s ability to meet challenging program milestones as pictured below. Recent façade installation places the façade’s installation progress following closely behind the builder’s slab casting and formwork.

2020 was a difficult year for the world of facades, but at team Yuanda, we pushed through the hardship to maintain delivery times against all odds.